The schema of virtual machines is shown below: 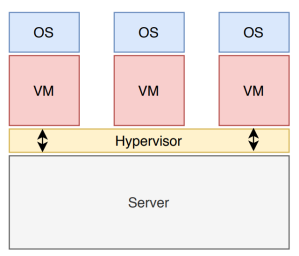 Why do we need virtualisation?

Virtualisation machines (VM) are actually made up from files that contain the configuration of the virtual machine. The configuration of the VM describes how much and what resource the VM has. For instance, how much RAM  it has, how many processors are allocated to it, how many network interface cards are in it, and so on. These configuration files also contain information about the storage the VM can access. Some additional logging files are also created when creating a VM,  for memory management and backups.

Virtualisation helped to resolve a problem of optimising server resource allocation and use one server for multiple applications. It also resolves another issue: softwares that are incompatible with the host operating system can be run in a VM. However, they are not fully optimised as on each VM we need to install a separate OS. The following schema shows the overhead of using virtual machines. 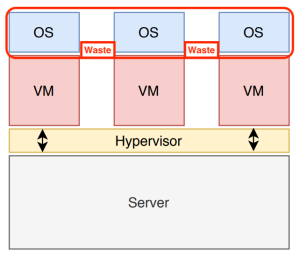 This is a waste of resource, and this slows down VMs. Of course this is still an amazing technology and had many benefits, and finally not only our computer can trick us but we can also trick our computer! But still, is there another way to create these isolated environments that can host different operating systems?

The answer is yes, and it is Docker. Check my article about Docker if you are interested! Thanks for reading and see you soon!

I used the following book (that I recommend if you want to dive deeper!), and this cool article to be able to use a VMware (in my efforts to run some only Windows compatible softwares on my Mac).

2 thoughts on “Hello from the Virtual Machines’ World”