Maximum likelihood estimation (MLE) is a method of estimating some parameters in a probabilistic setting. It is based on finding the parameters of a probability distribution that maximise a likelihood function of the observed data. The idea is to find the probability density function under which the observed data is most probable, the most likely. This blog gives a brief MLE overview.

Suppose that I show you a sample of random variables (x1, x2, …, xN) generated from a Poisson distribution, but I am mean and don’t tell you the parameter of the distribution (θ). You are naturally very keen in estimating the parameter θ.

Thus, the MLE is a method that estimates some parameters by choosing the values of the parameters that maximise the probability of observing the sample we got. Thus, ML estimation gives the parameter value that makes the data the most probable.

We started the above example by assuming that you observe a sample (x1, x2, …, xN) generated from a Poisson distribution. Therefore, you observed a sample of random variables and you assumed that the true distribution is in the family of Poisson distributions. This is your hypothesis that you make for the MLE. Once you made this assumption, you can use the MLE to estimate the unknown parameter of the distribution, however, your hypothesis about the family of the function must be good to assure that the MLE works well.

So the summary of the steps of the maximum likelihood estimation are:

We call this joint density the likelihood function, conditional on the unobserved parameter(s) θ. x is the collection of all observed data. The likelihood of the data described the underlying data generating process, that is we could generate artificial data having found the parameters.

It is usually easier to work with the log likelihood function:

Which means that the ML estimation of the parameter(s) θ is the value of θ that maximises the log likelihood function. Let’s see two examples: one discrete case and one continuous case for the MLE!

Example of ML with discrete data

As you assume that the observations are i.i.d., their joint density, the likelihood is the product of the individual densities:

And the actual log likelihood for the observed sample is:

Now the question is: what value of θ maximises the likelihood of observing the above sample? By taking the derivative of the log likelihood function with respect to θ and solving it to θ we find:

And since the second derivative is negative, we see that the found optimal value for θ is a maximum. 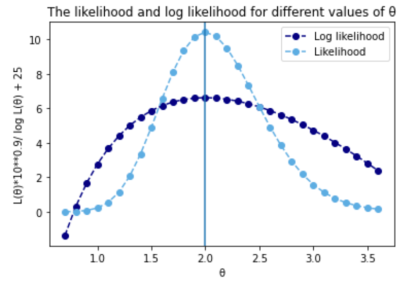 Example of ML with continuous data

For the same set of observations, let’s now suppose that the underlying distribution is a normal. In this case, we search the mean (μ) and the variance (σ²) by ML.

Assuming that the observations are i.i.d, the likelihood can be written as:

Maximising the log likelihood w.r.t. μ, we find the ML estimation of the mean and variance:

Again, we find that the maximum of the log likelihood (and the likelihood) is achieved when μ = 2, which coincides with the sample mean. The corresponding sample variance is 2.6. One limitation of the ML approach is the systematic underestimation of the variance when applied to the Gaussian. The intuitive explication is that we estimate the variance w.r.t. the sample mean and not the true mean. The ML approach will obtain a correct mean but a biased variance:

Where do we use MLE in Machine Learning?

MLE can be used for a problem of Machine Learning in several settings.

First, we can view the problem of fitting a machine learning model to the data as a problem of density estimation in the following way. Let the choice of the model and the model parameters be the hypothesis. (In comparison, our hypothesis in the above two examples was that the underlying distribution is a Poisson or a Normal distribution.)

Consider for instance the problem of predicting a continuous target, t. Let’s assume that your model is a linear model y(x) = wTx. However, this gives only a point estimate for the target variable for a new value of x. Let’s introduce the uncertainty of the model by assuming that the probability of the target conditional on the data (x), the parameter vector

and hyperparameter (σ²) is a normal distribution with mean wTx and variance σ². Now we can use MLE to estimate the values of σ² and the parameters w! Thus, we can use the MLE to find the modeling hypothesis that maximises the likelihood function.

Second, using MLE as a density estimation may be applied for clustering algorithms. It can be used to predict the parameters of different clusters.

Third, we can use MLE for models where we are interested in the conditional probability of the output, given the input.

1) First, MLEs are intuitive, as we search the distribution that is most likely conditional on the observed data. It is widely applicable and can be used in various cases. Furthermore, many ML problems can be interpreted as a special case of MLE.

1) With small sample sizes, ML are not precise, they can be heavily biased as they depend on the exact sample.
2) Calculating MLEs can often be very complicated (with complex, non-linear equations).